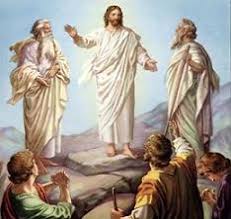 The Gospel reading of the Second Sunday of Lent is about Jesus’ transfiguration.

“Jesus took with him Peter and James and John and led them up a high mountain where they could be alone by themselves. There in their presence he was transfigured: his clothes became dazzlingly white […]. Elijah appeared to them with Moses; and they were talking with Jesus” (Mk9:2-4).

Why did not Jesus show his glory to all the Jews, or, rather to all mankind? Why did He choose just three of his disciples and lead them apart, where nobody could see?

If He had been transfigured in front of all Israel, people would certainly have fallen at his feet and they would have believed in him. He would have gained obedience. Obedience out of fear, but not out of love. Not out of our free choice of him as our God and king. Even those three disciples, who were supposed to be the most used to see his wonders, “were so frightened” (v.6) at the sight of his glory.

As said in last Sunday’s reflection, Jesus does not like easy options, easy ways to be recognised as God. He rather wishes a response of sincere love to his own Love, which is an immeasurable and unconditional love.

In the first reading, from the book of Genesis, we see Abraham who is asked by God to sacrifice his son Isaac.

There were no child-sacrifices among the Israelites:  human sacrifices were forbidden. Instead, this was a practice of other nations, like the Canaanites. In Israel, the firstborn child was offered to God, but not to be sacrificed. It was to be “bought back”, “redeemed”. And this was also to remember how the firstborn sons of the Israelites were spared during the final plague of Egypt, when all the firstborn of the Egyptians died.

And Isaac as well, Abraham’s beloved son, has his life spared. It is very interesting to compare this episode with what God did for us in Jesus Christ: not men’s firstborn sons to be offered to God anymore, but God’s only begotten Son to be offered to all humankind, once and forever.

And his life was not spared. He really died. And He himself offered this sacrifice to the Father for our sake. And then the Father gave him back his life, redeemed him and us all in him. He is God and lives forever.

As we read in today’s second reading: “With God on our side who can be against us? Since God did not spare his own Son, but gave him up to benefit us all, we may be certain, after such a gift, that he will not refuse anything he can give” (Rm 8:31-32)

The Father looks now at the whole human race through the open wounds of his Son. How can we ever doubt his love? Or be afraid of him? His only Son has taken on our flesh: now, every man on the face of the earth reminds the Father of his dearly beloved Son.

And what about that awesome experience on the mountain? Do you remember in which other passage Jesus takes these three disciples apart? In the Gethsemane. He asks Peter, James and John to go to pray with him (Mt 26:36-38; Mk 14:32-35). No light is shining there. Human sadness and anguish are fighting in Jesus’ heart against his firm resolution to do his Father’s will. But in this very moment Jesus’ glory shines as well: in his final obedience to the Father. Saint John often uses the term “glorify” and “hour” to refer to Jesus’ Passion:

“«Now my heart is troubled, and what shall I say? ‘Father, save me from this hour?’. No, it was for this very reason I came to this hour. Father, glorify your name! ». Then a voice came from heaven, «I have glorified it, and will glorify it again».” (Jn 12:27-28). In this passage, Jesus has already entered Jerusalem, where his Passion will take place. The voice of the Father is heard again, as in the baptism and in the transfiguration.

Let us then follow our King of glory even when his glory seems to be concealed from our eyes: in our own hour of sadness, suffering and loneliness. Let us keep firm in our faith. Our Lord’s glory will shine on us, suffering will be unexpectedly changed into joy, and death into life and resurrection!

…“and he remained there for forty days, and was put to the test by Sata...